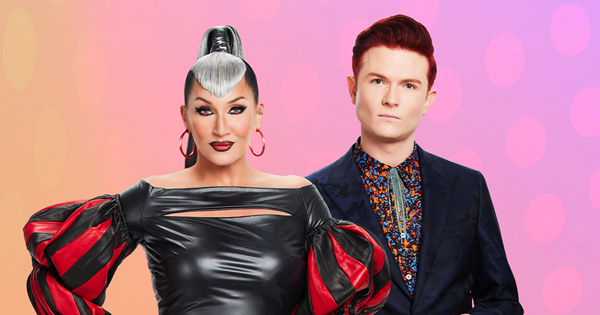 She’s a former member of US girl group Persuasion who went on to become a radio star, while he’s an Aussie comedian of the stage and screen. Together, Michelle Visage, 53, and Rhys Nicholson, 32, join drag queen extraordinaire RuPaul, 61, as judges on the cult reality series RuPaul’s Drag Race Down Under, which is filmed right here in Aotearoa.

Here, they chat to Woman’s Day about judging the best of New Zealand and Australia’s drag scenes, what to expect from the second season and what they’ve learnt from life among us Kiwis.

Congrats on the success of Drag Race Down Under. We’re so glad it’s back! What did you learn from the first season?
Michelle: One thing I have learnt from the Australasian queens I’ve spoken to is that parents here tend to accept their queer children more. A lot of these kids’ mothers have gone to their shows and have helped them get into drag. It seems to be a more loving and welcoming culture here.
Rhys: I learnt that lighting is everything! Completely selfishly, the only reason I did season two is because if you look at season one, I’m never in my right light. I clearly had no idea how to be on television and was always leaning over because I was so excited to be there!

What was your most memorable moment from season one?
Rhys: Meeting Ru! When the lights went on the first time and I saw Ru standing on the top of the runway, that was maybe the most full-on thing I’ve ever seen in my life. Then the girls were all lined up and I was like, “This is going to be a fk-off season!”
Michelle:** Definitely episode one when those queens took the stage. It’s a smaller stage and a smaller studio, but one thing that was not small was their hearts, their love, their dedication and their excitement. It was an amazing feeling.

What’s it like working here in Aotearoa?
Michelle: We love New Zealand! It’s a bucket-list place for everybody I talk to and when you live here, you don’t quite realise how special it is. This place is magical, and the people are wonderful, loving, kind and sweet. I love being on the water and I love the beaches, particularly Kohimarama – it’s just beautiful. We went to Hobbiton, Waiheke Island and Devonport, which was very quaint and old-fashioned, like Martha’s Vineyard in America. I loved it all!
Rhys: I am also obsessed with New Zealand, deeply so. I’ve been coming here for years and I don’t know why more Australians don’t. But then maybe we should keep that to ourselves, otherwise they’ll start coming over and ruin it!

Do you find the Kiwi slang confusing?
Michelle: Yes! There’s one that confused both Ru and me. We were in a store and somebody said, “Sweet as!” And Ru was like, “Did he just say I have a sweet ass?” We were cracking up and I said, “No, I think it was ‘sweet as’, like ‘sweet as f**k’.” So that’s something new and cute that I’ll bring back to America.

If you could get absolutely anyone as a Drag Race guest judge, who would it be?
Rhys: Dolly Parton seems like an obvious choice and Jacinda Ardern. I mean, she’s been a little busy the past couple of years. Also, we had Taika Waititi on the first season via video link, but having him in the room would be amazing. Mainly I just want to meet Taika!
Michelle: Madonna, but everyone knows that! And Rhys is right – we’ve always wanted Dolly. Also, I’d love to have Kylie Minogue sitting there in person. And I’d like Kath and Kim there in character.

How would you describe Down Under drag culture?
Michelle: It’s fantastic. I mean, you think of Priscilla and you think of Australia – it’s very camp.
Rhys: Aussie and Kiwi drag can be real rough and tough, but that’s how I like it. We’re not obsessed with turning a look and doing a perfect Beyoncé lip sync – we’re about authenticity and I’m obsessed with it.

How will this season of Drag Race be different?

Michelle: This question gets asked a lot and the answer is simple – the queens are different! And when the queens are different, the show is different. The format stays pretty much the same because people love it.
Rhys: The show this year is so full of bloody drama in a great way. I’m really excited for people to watch it and get to know the girls.