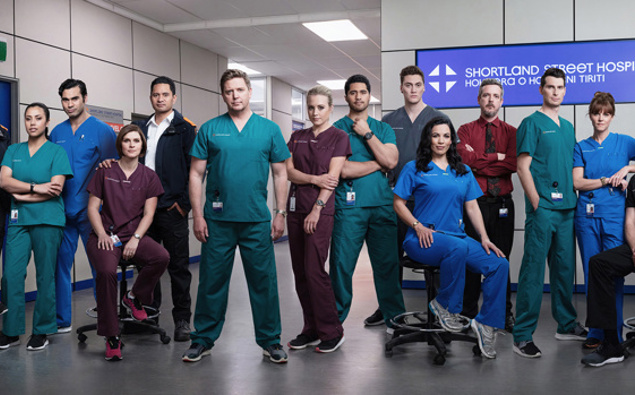 First broadcast on TVNZ 2 on May 25, 1992, the prime-time soap opera focused on the lives, loves, and dramas of the staff at the fictitious Shortland St hospital in the made-up Auckland suburb of Ferndale.

From murders to love affairs to politics to the notorious Christmas cliffhanger episodes, the series was never afraid to tackle the tough topics facing society in NZ in the 90s and 2000s. It aged with all of us, often anticipating events that affected the nation with their dramatic storylines.

But perhaps, most significantly, Shorty – as it’s affectionately called – is responsible for launching the Hollywood careers of some of New Zealand’s most well-known actors.

The show has long been considered something of an acting school for young Kiwis, with many an up-and-coming young drama buff getting their start on the series. They went on to appear in global hits from Star Wars to The Lord of the Rings, and more recently in Netflix originals.

Here we take a look back at the Shorty stars who made it big – and where they are now.

Martin Henderson, now 47, played teenager Stuart Neilson on Shortland St from 1992 to 1995. Born and raised in Auckland, Henderson was a keen young actor at school. His three-year stint on Shorty led him to being cast as Nathan Riggs on US medical drama Grays Anatomy.

He also famously starred alongside Britney Spears in the 2003 music video for her hit song Toxic. Henderson spoke out in support of the singer during her conservatorship court battle, telling Page Six in July 2021 that she was a “genuinely good person” who had been “hounded” by the press.

Apa played teenager Kane Jenkins on the show from late 2013 to mid 2015. The character was created to explore New Zealand’s high teen suicide rates – though Apa’s character ultimately survives and rediscovers his passion for rugby.

Apa has recently become a father to son Sasha Vai Keneti Apa with his partner, French model Clara Berry. He will continue in his role as Archie Andrews on the seventh and final season of Riverdale.

Now 33, Rose McIver was just 18 months old when she debuted in her first short film role – by the time she turned 5, she’d appeared in a trio of Hercules movies for TV, had a brief role in Kiwi director Jane Campion’s The Piano, and appeared on Shortland St. McIver played a young character named Holly on the show.

She went on to appear on Xena: Warrior Princess and fellow Kiwi Peter Jackson’s 2009 film version of The Lovely Bones.

More recently, McIver returned to the spotlight with her role in Netflix’s trio of Christmas Prince films, in which she plays an undercover reporter who falls for a prince.

Born in Rotorua, Temuera Morrison MNZM started acting at just 11 years old. He is known for playing Dr Hone Ropata on Shortland St from 1992 to 1995 – yes, the man to whom the iconic line “You’re not in Guatemala now, Dr Ropata!” was addressed in the very first episode. He returned after 13 years to mark the show’s 4000th episode.

Now 61, the prolific actor and musician has gone on to star in huge franchises, playing Jango Fett and his clones, including Boba Fett, on Star Wars.

He also starred in Once Were Warriors with Rena Owen and with fellow Star Wars alum Harrison Ford in Six Days, Seven Nights and has returned to the Star Wars universe in 2022 with the Disney+ series The Book of Boba Fett.

While Wellington-born Karl Urban is perhaps best known for his role as Rohan warrior Eomer in Peter Jackson’s The Lord of the Rings trilogy, he too made a name for himself on Shortland St.

He appeared as paramedic Jamie Forrest in mid-1993 on the show, returning later in the year for a six-month recurring stint. Forrest was the first openly gay character to feature on the show.

Now 49, Urban went on to star in The Bourne Supremacy and in Star Trek and Star Trek Into Darkness. He also played a starring role as Billy Butcher in Amazon Prime’s The Boys, as well as a turn in fellow Kiwi Taika Waititi’s Thor: Ragnarok film playing Skurge alongside Chris Hemsworth, Cate Blanchett and Mark Ruffalo.