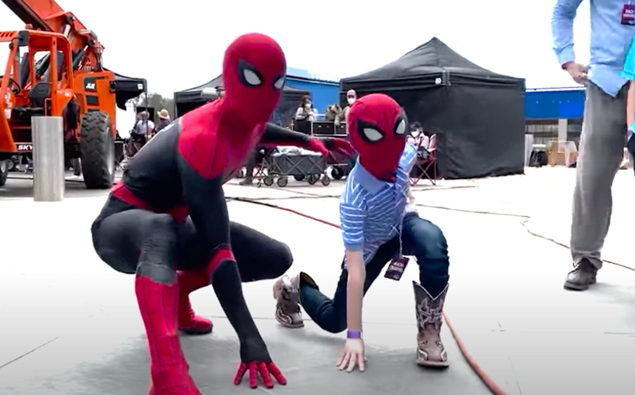 A boy’s heroic act earned him the chance to be like Spider-Man – and his family labelled the cast “real life heroes”.

Tom Holland, Zendaya and other cast members from Spider-Man: No Way From Home spent the day with a young boy who helped save his younger sister from a dog attack last year when he was just six years old.

The young boy, Bridger Walker, defended his sister in 2020 when a dog began attacking his sibling.

Now the young boy has been honoured by one of the Avengers. He got to participate in a special “web swing” with Holland, and learned the iconic Spider-Man pose.

“A huge thank you to Tom, @harryholland64, @zendaya, and the entire Marvel/Sony cast and crew for this dream-come-true adventure,” Bridger’s father Robert shared on social media.

“They don’t just act the part of friendly neighbourhood heroes – that’s what they truly are,” Walker’s father wrote in an Instagram post detailing the exciting day.

“The look on the kids’ faces was priceless when we rounded the blue-screen to see Tom, in full costume, high above the set on a light post. It was emotional to see him wave at the kids like he was the one that was supposed to be excited – not the other way around.”

In 2020 the young boy received an overwhelming response from some of Hollywood’s biggest stars, including Mark Ruffalo, Chris Evans and Octavia Spencer.

Ruffalo wrote: “Real courage is knowing what is right to do and doing it even when it might end up hurting you somehow. You are more of a man than many, many I have seen or known. With Admiration…Mark Ruffalo (Bruce Banner/Hulk/Professor).”

This article was first published by the NZ Herald is republished here with permission.