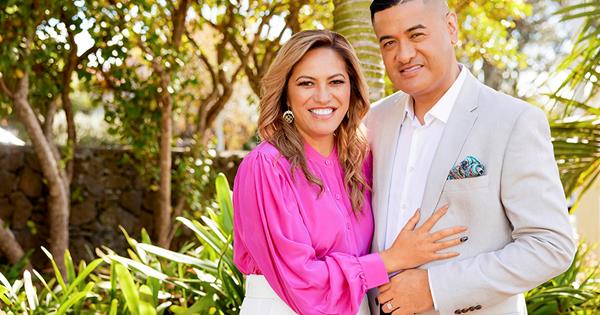 For five years, Francis and Kaiora Tipene have been on our screens sharing their lives as funeral directors. Their hit show The Casketeers has not only captured the hearts of Kiwi viewers, but also taught us
a lot about handling grief and tikanga – Māori customs and rituals.

But dealing with grief and sadness every day does not make it any easier for the couple when it involves someone close to them.

When Francis and Kaiora talk to the Weekly, it is obvious they are grieving and experiencing a great deal of emotion as they talk about the loss of Stanley Neho – their longest-serving employee and founding member of Tipene Funerals.

“He died suddenly in his sleep two weeks ago,” says Francis. “He is like the dad that you relied on. He was the feet, the foundation of us, and he would say to us when we were on television and everything was going great, ‘Hey, hey, slow down. Think about the people. Are the people okay?’

“There was one point at our Henderson chapel where they had no air conditioning and he said, ‘You’re going off and buying cars but what about the air conditioning for your people in the chapel?’ He was a wise man.”

Kaiora says he was also the moderator between her and Francis when things would get tense after one of her husband’s random and often expensive purchases. He would tell Francis that he really should listen to his wife and pay attention.

Both agree that the grief is hard because they spent so much time with Stan.

“We’ve never experienced the kind of grief that we’re going through. It’s a great loss for us,” says Francis.

When Stan died, the current season of The Casketeers was finished and ready for broadcast, but they felt so strongly that they wanted to honour Stan that they rang up the producers and asked if they could shuffle some stories and film his funeral for the show.

“And they managed to do it which was just so beautiful,” shares Francis.

Stan was a funeral director but was also well known for his light and sound systems, and worked with bands doing their concerts, so the Tipenes made sure his funeral had the full array of lights, smoke machines and speakers.

“It was truly a reflection of who he was,” tells Francis. “We had kapa haka, my wife did a poi and we had musical items. It was a great celebration of his life.”

As Francis talks, it’s good to see he is looking in tip-top shape after a health scare last December which had him hospitalised twice. He needed life-saving surgery after a simple operation to remove his appendix went wrong. He was very ill for several weeks, but says he is now fully recovered but possibly not eating as well as he should be.

“There’s been the grief and with that comes the comfort eating, and I’m not going to lie, it’s beautiful,” he laughs. “I enjoy it and it helps us get through. But it’s got a timeframe and I’m going to get back on the wagon soon.

“In two weeks’ time our trainer gets back from India, so that gives us time to eat and be with Stan’s family and share memories. Reminiscing and eating go hand in hand, and that’s what we do together.”

Francis has been very open about the fact he had bariatric surgery a few years ago to help him lose weight and he says he’s committed to being healthy, even if in this latest series of The Casketeers he is caught sneaking off for a pie from the bakery.

The Tipenes are well used to having cameras following their every move after inviting the TV crew into their lives for five years now.

“We eat together, we sometimes party together,” says Francis. “Everyone’s just used to them being around.”

Although it can be easy to forget they are there. “I’ll sometimes have a moan to Kaiora about something they’ve asked me to do that I don’t want to, and forget that I’ve got my microphone on and they can hear every word. Then our director will yell out, “Okay, you don’t have to do that then!”

A new star of this series is the couple’s eldest boy Nikora, 16, who works part-time for his parents cleaning the cars and trimming caskets.

“He’s a bit of a character,” says his mother. “He’s doing full-time study for automotive engineering, which he loves, so when he’s not studying, he’s with us.”

Which can cause problems for his always immaculately groomed parents.

“He wears these shorts all the time, and on the show we did a presentation at a care home and there he was in his grubby shorts,” recalls Francis. “I was about to send him down to Hallensteins to get some long pants, but then we just went with it. Most families can relate to that with children, so that was nice.”

Managing a family of five boys and a business which has expanded to three chapels in Onehunga, Henderson and Porirua is a challenge for Francis and Kaiora.

“It’s very difficult,” admits Francis. “We’re thinking of employing an overall manager because it takes us away from the funerals and looking after the families. But when you’ve got bills and people ringing you for this and that, you’re pulled away.”

Kaiora says making sure they still provide the same service and quality means they’re at the stage when sometimes they have to turn people away. And they admit they’re still learning how to get everything right.

“We don’t come from a business family, so we’ve had no guidance from parents and we’ve had to learn it all ourselves,” says Francis. “But that’s not a bad thing because it’s really tested us and made us do things we’re uncomfortable doing.”

But there is a downside and that is the children are not getting enough time with them. The Tipenes have five sons, Nikora, 16, Moronai, 14, Mihaka, eight, Mikae, six, and Francis Jnr, three.

He says the goal for the family is to try to get more balance and spend more time at home.

“I feel the business will continue as long as we keep an eye on it, but our children are suffering the most. They are healthy but, in our eyes, we can see what we lack.”

Kaiora agrees but thinks Francis is being too hard on himself.

“The kids know that Mum and Dad are there, and they FaceTime us all the time when they’re bored. And they always want to come to work and help us, but sometimes that’s more trouble than it’s worth!”

She says that all her boys have their own personalities and when they’re all together have a lot of fun, especially with their youngest Francis Jnr, who is now happy to take on his older brothers.

“If I’m telling off one of the boys, Francis Jnr will get in on it and start trying to beat up his 14-year-old brother!”

Kairoa says that mummy time is also important for her.

“I still love to get up in the morning and have my own little space, but the kids also ground me. They bring me back and I really cherish those moments.”

But there is more growth to come for Tipene Funerals. There will possibly be another TV series to film, and there will be some new chapels coming to Lower Hutt and Christchurch.

“It’s a gradual process,” tells Francis, “but those are our goals and then after all that we might take a big holiday with the kids.”

And Casketeers viewers will be pleased to know that Francis is still prone to buying “bits and pieces” for the business that Kaiora doesn’t approve of, including two huge white plaster angels he bought off Facebook which feature in the show. Although when it comes to cars, it’s Kaiora who has been spending up large.

“She bought two brand- new cars for the business and I thought that was a waste of money because I could have bought eight secondhand cars for the same price,” laughs Francis. “But you get what you pay for and they’re amazing because they never break down.”

Kaiora quips, “If Francis had bought those eight cars they would have ended up at the mechanics within a week.”

There is no doubting that these are good times for the couple and everything is going well with their business, but they admit there are moments when they wish they could rewind and go back to the very beginning when they started Tipene Funerals in 2015.

“I never thought this is where we would be today, to be honest,” says Kaiora. “I do wish that I could go back to that place.”

“Same,” says Francis. “We took the children to work with us, looked after them and I dressed them, and we had them after school.

“So sometimes we wish we could go back there, just for a bit of a reprieve from the busy world that we live in. But you know, as much as we are busy, we hope that the families we take care of have beautiful funerals and send offs. So as long as families are satisfied with the service they get, then we’re happy.”