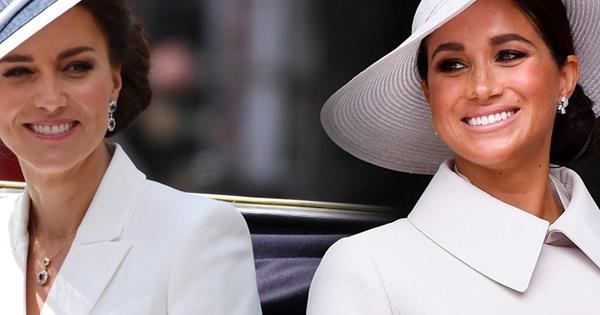 The royal family has marked Meghan, Duchess of Sussex’s birthday with a series of social media tributes, dispelling rumours of ongoing tensions between the monarchy and Meghan.

She celebrated her 41st birthday privately on Thursday, likely spending the day with husband Prince Harry and their two children, Archie and Lilibet.

Meanwhile her in-laws led the public tributes for her special day, Prince William and Catherine, Duchess of Cambridge taking to Instagram with a special message.

“Wishing a happy birthday to The Duchess of Sussex!” they penned alongside a photo of the duchess during the June celebrations for the Queen’s Platinum Jubilee.

The couple shared the same photo and message to Twitter as well, where Prince Charles and Camilla, Duchess of Cornwall joined in the celebrations.

Sharing another photo of Meghan from the Jubilee celebrations, the future king and his wife wrote: “Happy birthday to The Duchess of Sussex!”

However, there was no message from any of the Queen’s official social media accounts.

There have been longstanding rumours of a “feud” between Meghan, Harry and senior members of the monarchy following the Sussex’s 2020 royal exit.

In June the couple returned to the UK together for the first time, bringing their two young children to join the extended royal family in celebrating the Queen’s jubilee.

Though the couple only appeared at one public event – a Service of Thanksgiving on June 3 – it’s understood they also spent time with the royals away from the spotlight.

A highlight of the trip was introducing their daughter Lilibet to the Queen, whose own childhood nickname inspired the moniker Harry and Meghan chose for their youngest child.

Lilibet also celebrated her first birthday in the UK, with delightful photos emerging from her birthday party after the visit.

Since returning to the US in June, the Sussex family have been keeping a low profile, with Harry and Meghan making only a few rare public outings.

There were hopes that the duchess would appear for her birthday on August 4, as she marked her 40th in 2021 with a special video with actress Melissa McCarthy.

The clip was designed to promote her 40×40 initiative and Harry even made a brief cameo – but there was no such video for her birthday this year.