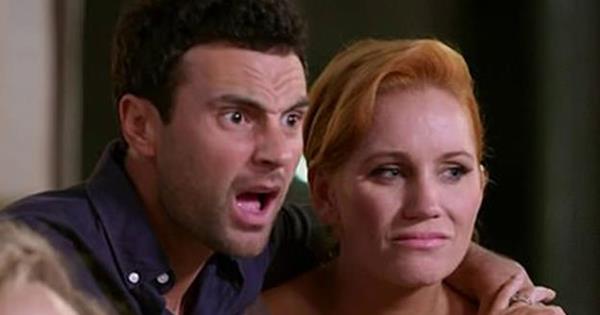 Love it or hate it, it’s hard to imagine another Aussie reality show that delivers more entertainment than the beast that is Married at First Sight.

While MAFS started out relatively tame during its debut season in 2015, in recent years it’s given given us some of the most memorable moments in reality TV history.

From wine-throwing, cheating scandals and couple swaps, the list of the biggest MAFS bombshells could go on for days, but in the spirit of season nine nearing its premiere date, we’ve compiled the dating show’s most chaotic moments.

When it comes to drama, Bryce was the MAFS gift that kept on giving. On the 2021 season, the brides and grooms were tasked with rating each other from most attractive to least attractive. And yes, it was a recipe for disaster.

Bryce hit a nerve with his bride (and now real-life wife) Melissa after he placed her photo fourth in line.

“I’ve always gone for the blonde hair, blue eyes, tan kinda girl. And usually tall. I can’t say 100 per cent I’d come up to you in a bar and buy you a drink,” he told Melissa, instantly solidifying himself as season eight’s villain.

Digging himself an even bigger hole, he continued: “When I first saw you I thought, ‘Not my type’. But, I thought, she’s not… ugly?”

Melissa took the ranking to heart, saying “fourth place… you don’t even get a medal for that.”

The 2020 season of MAFS hit new lows during “toothbrush-gate”, when David Cannon used his on-screen wife Hayley Vernon’s toothbrush to scrub his toilet after she kissed castmate Michael Goonan.

“It is real. It’s repulsive. It’s disgusting,” Hayley said of the foul act which was filmed on David’s iPhone and sent to the other grooms.

To make matters even worse, he still believed there was no harm done, saying: “She used it for five days. It’s her own poo, it’s her own bacteria in her own body so it’s not going to hurt her.”

In a romance that precisely no one saw coming, season five’s Troy and Carly got into a relationship after meeting up outside of the experiment where they failed to find love with their assigned spouses.

The new couple returned to the show’s final dinner party together – leaving their co-stars’ and MAFS fans’ jaws on the floor.

Fanatics of the show will remember that prior to news of their relationship airing, the twosome was photographed in a Melbourne park while still wearing their wedding bands.

Ines Basic had her eyes firmly on Sam Ball from season six’s very first dinner party, so it was no huge surprise when the pair engaged in a sordid affair.

Sam failed to connect with his on-screen wife Elizabeth Sobinoff, while Ines made no effort to hide her distain for her husband Bronson Norrish.

After a nightmare honeymoon, Ines secretly contacted the Sydney-based tradie via social media.

Ines and Sam then got flirty at the dinner party, with the former legal aid worker exclaiming: “If Sam doesn’t show up and he’s left the experiment, I’m done.”

The pair eventually enjoyed a steamy sleepover in a hotel room, and the affair was later exposed at a commitment ceremony.

Jessika Power and Dan Webb break up on national TV

Deciding the moment you want to break up with a partner is never a welcome feeling, but deciding so while live on national television has to come with a whole other ballpark of emotions.

It all went down when Jessika Power and Dan Webb, who couple-swapped with each other while appearing on MAFS’ sixth season, appeared on Channel Nine’s sister show, Talking Married.

The appearance came directly after the bombshell finale episode that saw them relive their journey together throughout the series—the very same episode that showed Jessika had also propositioned fellow contestant Nic Jovanovic, to no avail.

When discussing their trust issues, Jessika decided not to respond and looked deadpan at the camera while ignoring all of Dan’s questions. Safe to say, it has to be one of the most awkward moments to ever play out while live on air.

Dean Wells and Davina Rankin cheat on Tracey Jewel and Ryan Gallagher, respectively, with each other

Dean Wells has easily taken the crown as one of the series most controversial grooms and for good reason.

On season five, Dean began pursuing a relationship with Davina Rankin – despite being paired with their respective partners, Tracey Jewel and Ryan Gallagher. While on that date, charming Dean said he likes Tracey but that his wife’s “looks are not her best quality.”

In true MAFS fashion, producers saved the footage until the very last week of the show, before sitting everyone down to watch the affair play out. Which, of course, was met with an eruption of shocked reactions worthy of their own Academy Awards.

“It’s not good. All I was saying is that Tracey has many, many, many good qualities and she is beautiful,” he said in defense of his previous words. “But she has many other good qualities that even outshine how beautiful she is.”

Elizabeth Sobinoff shuts down Sam Ball for body-shaming her

It’s unsurprising Sam Bell has landed himself on this list twice. The tradie won himself absolutely no fans after he unabashedly fat-shamed Elizabeth at their wedding.

“I’ve never really dated girls as big as Elizabeth in the past,” he declared to the camera, going on to suggest that he could perhaps “get her running in the morning”.

During the reunion when the footage was played, Elizabeth channeled her anger into a total girl-boss moment to shut down down her then-TV husband’s abhorrent descriptions of her figure.

Surely you didn’t think we’d forgotten to include this gem? Arguably one of the most chaotic scenes to ever unfold on MAFS happened during its 2019 season, when Martha threatened to pour red wine on Cyrell… and actually went through with it.

The incident, which is truly a history-making moment for Aussie pop culture, happened during the final dinner party before the couples left to re-enter the real world.

Tensions between Martha, Jess and Cyrell had been building for weeks, so it came as no surprise that things really escalated.

“If [Cyrell] keeps talking to Michael I’m going to crawl across the table and gouge her eyes out,” Martha said after a heated argument with Cyrell, before strutting over and pouring wine directly onto Cyrell’s head.

Cyrell lived up to her nickname of ‘Cyclone Cyrell’ and ran after Martha, managing to splatter red wine on her white Prada frock.

Following the incident, Martha admitted she felt regretful over her rash actions. “Totally, it’s embarrassing. I’m a 30-year-old grown woman,” she told 9Now. “In the moment I thought that would be the best option.”

Cast your mind back to 2017, when one of the explosive moments of MAFS season four wasn’t between the couples, but between a groom and his father-in-law.

Normally when parents don’t approve of their kids’ love interests, they wait until said love interest is out of the room. But Hamish berated Andrew for what felt like hours, right to his face.

“He’s so small, and look at his tattoos,” Hamish said to Cheryl in front of Andrew, before turning to her new partner and demanding to see the size of his hands.

The staunchly-overprotective father then told Andrew he wasn’t dressed appropriately, and made him leave to get changed, “Get the f–k out of the house and get ready. I’m serious,” he yelled.

Hamish later told the cameras: “He’s not suitable for my daughter. It’s not going to happen, it’s not meant to be. If I can come between these guys, I’m going to break them up for sure.”