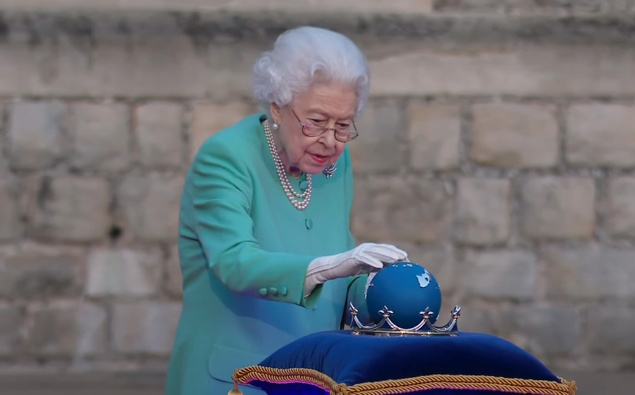 Queen Elizabeth II put aside pain to light a chain of more than 3,500 Platinum Jubilee beacons that stretched around the world in honour of her record 70-year reign.

She started the illuminations across Britain and the Commonwealth, hours after Buckingham Palace said the monarch, 96, was pulling out of tomorrow’s thanksgiving service for her reign at St Paul’s Cathedral, London. after she had experienced “discomfort”.

She was seen laying her hand on a specially designed and glittering Commonwealth of Nations globe at Windsor Castle.

It was part of a special dual ceremony that saw her grandson the Duke of Cambridge, 39, waiting 22 miles away at Buckingham Palace to light a 21-metre beacon centrepiece known as the living ‘Tree of Trees’ sculpture on Her Majesty’s command.

Leaning on a marble-topped wooden cane, the Queen smiled on her third public appearance of the evening.

The beacon represented her previous Jubilees as it included elements of silver, gold, diamonds, and platinum – stones in the Crown that signify the unification of the four nations of the United Kingdom in celebration of the Jubilee.

They were collected from the top of the four highest peaks across Britain – Mount Snowdon in Wales, Scotland’s Ben Nevis, Slieve Donard in Northern Ireland, and Scafell Pike, England.

Around 3,300 were lit in the UK and Commonwealth countries as the first day of the four-day celebrations of her Platinum Jubilee ended.

Grammy-winning singer Gregory Porter, 50, led a choir singing ‘Song for the Commonwealth’ as the ceremony took place, while Buckingham Palace lit up with a montage of photos of the Royal Family and highlights of the Queen’s reign.

As Her Majesty began the beacon chain, hundreds of fireworks were set off on the Long Walk.
Event organiser Bruno Peek revealed she cracked a joke after the ceremony.

He said: “She loved the number of beacons, as we have more than 3,300 across the UK and Commonwealth this year, which is a record.

“She said, ‘More beacons! Every time you do it you have more beacons!’ Which was great, really funny.

“It was so nice to be with her again. To be able to stand next to your monarch commemorating a unique anniversary and moment in her life is such a privilege.

“It was the end of a very long day for her but she looked like she didn’t want to leave.”