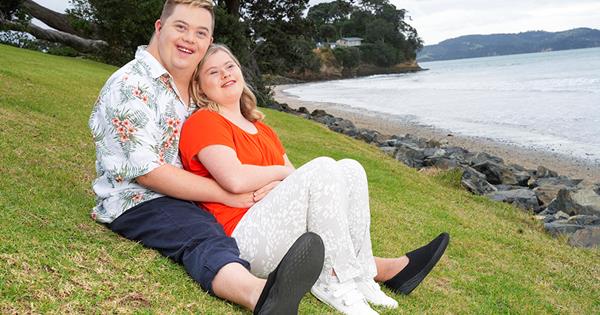 Between the drama-filled antics of Married at First Sight and The Bachelor franchise, dating shows have developed a bit of a bad reputation. But TVNZ’s new series Down for Love is here to show that sometimes the quest to find love on TV can work.

The charming new show follows six people living with Down syndrome on their journey to find love. One of them is 23-year-old Leisel Shepherd, who this week celebrates not only her television debut but also her one-year anniversary with her boyfriend Brayden Pettigrew, whom she met on the series.

“He is my true love and my handsome Prince Charming,” enthuses Leisel.

When the Weekly arrives at Leisel’s family home on Auckland’s North Shore to talk to the happy couple, their special connection is apparent. Brayden, 21, constantly showers his “Queen” with compliments and sweet kisses. As he jokes with Leisel’s mum Brenda and dad Paul, both 56, it is clear Brayden is one of the family.

This is both Leisel and Brayden’s first relationship, and they admit they were nervous before their first date, not knowing what to expect or who would be waiting for them on the day. But their worries soon disappeared as they played a highly competitive game of mini golf.

“I didn’t know what to expect,” recalls Brayden. “But then we just clicked and there was a spark. In The Monkees’ song I’m a Believer, there are the lyrics, ‘I thought love was only true in fairy tales,’ but it’s not, it happens in real life as well!”

While they both signed up for the show to find that special someone, Brayden says they also hope to show the world that people living with Down syndrome are just like anyone else.

And it’s not just Leisel and Brayden who hit it off right away – both of their families get along too. Brenda says Brayden is exactly the kind of person she was hoping that Leisel would find.

“I wanted someone outgoing and kind, and someone who was good for her,” says Brenda. But she adds that finding love has also brought out a more independent side she hadn’t seen before in her daughter.

“She’s got a bit bossier, actually,” laughs Brenda. “She thinks now she’s totally grown up, and wants her own way and to have her own rules, but it’s been good.”

“My family loves Leisel. She is a really thoughtful person. My mum adores her and my sister Willow, it’s like they are sisters. They have a lot in common.”

With their first anniversary just around the corner, Leisel says they are planning a romantic dinner for two to celebrate the occasion.

But the real celebration will be for their TV debut in this week’s episode of Down for Love.

Both Leisel and Brayden love music, and dream of one day being performers on stage, sharing their talents with the world.

“We want to live overseas in America, in a big mansion with a fireplace in the bedroom and an indoor pool,” says Leisel, who runs a successful business selling skincare and make-up products online with her mother.

While Brayden hopes to tour the world with his musical heroes Justin Bieber and Billy Joel, he says they would also love to settle down and have a family of their own.

They are also busy training for the Special Olympics in December this year, where they will both compete in a variety of sports including swimming and Leisel’s specialty, 10-pin bowling.

They are both highly competitive people, but Brayden has already learnt the secret to lasting love.

“No matter what, I always let my girl win.”