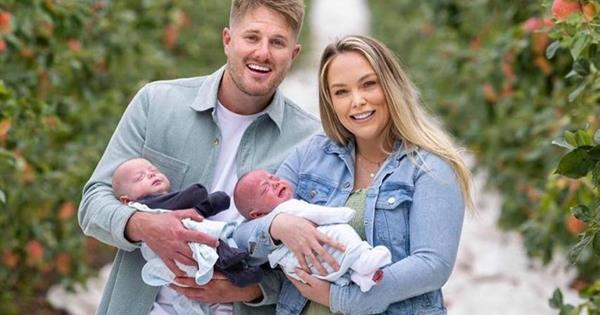 The boys are the perfect mix of their famous parents!

Bryce Ruthven and Melissa Rawson’s twins, Levi and Tate, are two of the most famous babies in Australia’s reality TV family.

Since their October 2021 birth, Melissa and Bryce have kept fans updated on every adorable milestone Levi and Tate have reached – and Married At First Sight fans can’t get enough of them!

The twin boys spent the first two months of their lives in the neonatal intensive care unit after arriving ten weeks premature, but have since made a full recovery.

Now that Levi and Tate are creeping up on their first birthdays, they’re starting to look more and more like their famous parents everyday.

In August 2022 Melissa confessed one of her sons is already looking like a “mini Bryce”, sharing the adorable photo above to Instagram.

The only problem? No one could tell if it was Levi or Tate in her snap.

Given the twins are almost identical, it stands to reason that if one of them looks just like Bryce the other must too – but fans insist the boys have inherited some of Melissa’s features too.

The proud mum agrees, admitting that little Tate has taken more after her while Levi resembles his father Bryce.

“I honestly think that Tate looks like myself and Levi looks like Bryce,” the mother-of-two said in April.

Tate is the spitting image of Melissa, having inherited her stunning green eyes and button nose.

Melissa has previously revealed that despite her boys being fraternal twins, rather than identical, she struggles to tell them apart.

“Also, for non-identical twins, even I’m having trouble telling them apart!” she said in February 2022.

A fan then added: “They are definitely identical! I’d definitely be getting them genetically tested as DCDA twins can still be identical if the embryo split early on ❤️.”

“Omg I thought they were identical in that first photo! How do you tell them apart usually? 💙,” another wrote.

Since giving birth, Melissa has been refreshingly candid about her struggles as a new mum. In January, she admitted to feeling like “a total failure.”

“The sleepless nights turn into sleepless days. You become forgetful, distant… and wonder to yourself, ‘when will this get easier?’ she wrote alongside a snap of her bottle-feeding Tate and Levi at the same time.

“That first coffee in the morning, after your little one has kept you awake all night, feels like the only friend that can help you get through the day.

“As the sun begins to set, you realise that you haven’t stepped outside your house in days. But you don’t feel bad, you feel safe hiding behind those four walls.”