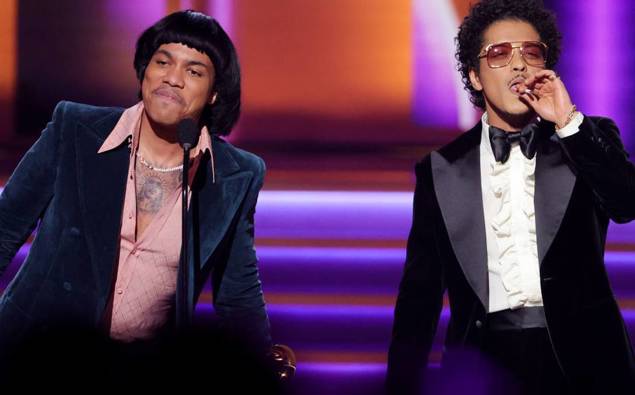 “Can we talk about that instead of Will Smith now?” was the question doing the rounds on social media after Bruno Mars lit up on the Grammys stage.

Viewers of the 64th Annual Grammy Awards were left shocked when Grammy winner Bruno Mars lit a cigarette on stage while accepting his prize for Record of the Year on Sunday night.

Mars took home the prize as part of the supergroup Silk Sonic, which comprises of Bruno and rapper Anderson .Paak.

After having a smooth dance in the audience, the duo then walked in front of the audience on their way up to accept the award.

Mars put a cigarette into his mouth, with some fans claiming they found the incident as shocking as Will Smith slapping Chris Rock at the Oscars the prior week.

One person was in fact so shocked that they claimed Mars had lost a fan in them: “Great music but did @BrunoMars just light a cigarette on stage???? One concert I will no longer go to.”

Another tweeted their hope that we can now stop talking about Will Smith: “Bruno Mars just lit a cigarette on the Grammys stage in the middle of accepting an award, can we talk about that instead of Will Smith now?”

Others shared their shock: “Bruno Mars lights a cigarette on stage while accepting a Grammy. WTH?”

And one queried what the events fire marshal might think of his actions: “I would like to see the fire Marshall fine Bruno Mars for smoking a cigarette on stage!!!!”

However, not everyone was baffled by the actions of Mars, with some calling his actions of the evening a “vibe”.

“It was the Bruno Mars accepting a #GRAMMYs and lighting up a cigarette on stage – vibe for me,” shared one person.

Another posted: “Did @BrunoMars just light up a cigarette on stage while accepting an award. I am living for his 70’s persona #TheGrammys.”

Mars and the Academy are yet to comment on the moment, which comes a week after Will Smith caused dramatic scenes at the Oscars after slapping comedian Chris Rock.

The 53-year-old slapped Rock on stage over a joke about his wife Jada’s shaved head – a result of a hair loss condition called alopecia.

Smith has since resigned from the Oscars’ Academy and issued an emotional public apology.

When announcing his resignation, he admitted his actions were “shocking, painful and inexcusable”.

Record of the Year

Album of the Year

WINNER: We Are – Jon Batiste

Song Of The Year

WINNER: Fight for You
HER

WINNER: Call Me If You Get Lost
Tyler, the Creator

WINNER: Believe for It
CeCe Winans

WINNER: Believe for It
CeCe Winans

WINNER: The Last Tour Of The World
Bad Bunny

WINNER: At My 80’s
Vicente Fernandez

WINNER: I Be Trying
Cedric Burnside

WINNER: Beauty in the Silence

WINNER: Carry On: Reflections for a New Generation from John Lewis
Don Cheadle

WINNER: All Eyes on Me (from Bo Burnham: Inside)
Bo Burnham

Best Arrangement, Instrumental or A Cappella

WINNER: To The Edge of Longing (Edit Version)
Vince Mendoza

Producer Of The Year, Non-Classical

Producer Of The Year, Classical